18 October 1977 is a very interesting spanner in the works of my system. The Google search for this date revealed not an event that occurred on that date but a cycle of paintings based on events that revolve around that date. How interesting that my chance date pulls up another artist who focused on that date as the basis of a painting project. 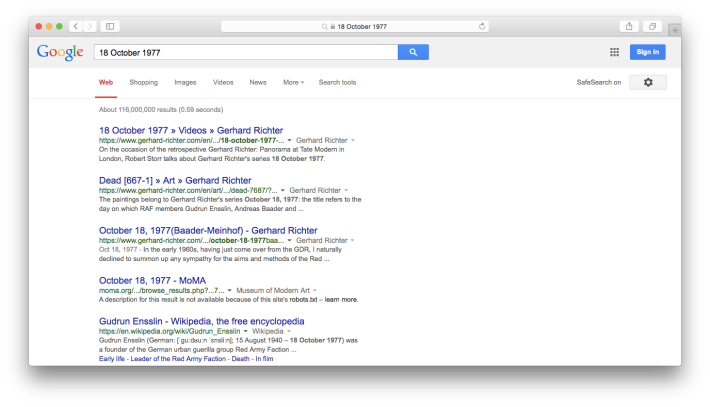 18 October 1977 is a cycle of 15 paintings, created in 1988 that depict blurred black and white photos of the Baader-Meinhoff arrests, suicides and funeral. They encompass The German Autumn, and the Stammheim Prison death night. The focus for my research then, and ultimately my painting (as dictated by this Google result), is not the events of that date in 1977 but the cycle of paintings, the artist himself and his motivations to paint this subject.

I therefore wanted to find images of Richter in the studio creating these works. My research lead me into the library and away from internet, and as this result was unique I decided my rules could adapt to allow this divergence. In looking for images I discovered the writings of Richter and interviews with him from the time of the cycle in this book:  Gerhard Richter, The Daily Practice of Painting: Writings 1962-1993, by Hans-Ulrich Obrist.

In it I read an interview titled Conversation with Jan Thorn Prikker concerning the cycle 18 October 1977, conducted in 1989, pp.183. It was illustrated with photographs of Richter in his Cologne studio in 1988 (with the works on view) by Photographer Timm Rautert. I ran a Google Images search for Rautert (timm rautert gerhard richter) and one image in the grid that stood out was this portrait of Andy Warhol from Warhol’s Interview magazine. It’s interesting that straight away this random date search has led me to two artists, then another in Warhol, I’m not looking for art references in this project, but they are emerging as an important focus of the research. 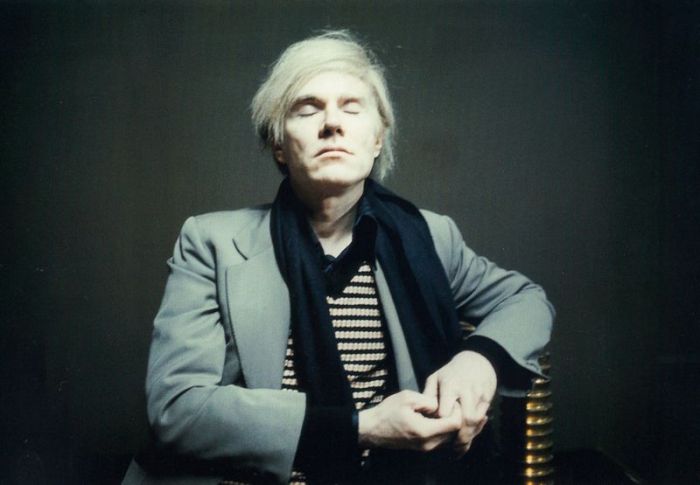 One of Google’s related image suggestions to this image was a photograph of Warhol photographing Muhammad Ali, I presumed it was by Rautert (as the caption read: Fotografował Timm Rautert but the link was dead). Such is the way with Google, everything is stripped of context. This is the image:

Satisfied for the time being I left the research there for a while whilst I pursued other avenues.

A couple of weeks later I was absent-mindedly flipping through this book over coffee at the breakfast table:

Victor Bockris. With William Burroughs: A Report From the Bunker, 1996. Cover artwork and design by Neville Brody

Victor Bockris’ With William Burroughs: A Report From the Bunker, 1996, and inside I was surprised to see an yet another image of Andy Warhol and Muhammad Ali with no photographer credit, I thought i must have been Timm Rautert’s photo but after a quick Google Images search (victor bockris william burroughs andy warhol muhammad ali) I found what I was looking for. The photo I though was by Rautert was in-fact by Victor Bockris and was taken on August 16, 1977 (iteration 3). So was the Timm Rautert connection purely coincidental and only linked via another artist, Andy Warhol? According to a quote on photographer and Bockris collaborator David Schmidlapp’s site, “Andy Warhol visited Muhammed Ali at the champ’s training camp in Pennslyvania, Fighter’s Heavens, [sic] on August 16, 1977“. Yet the caption written by Bockris in this print (below) states it was 1978. Is this just the date of the print? Could this photograph connect 2 or 3 (if not 4, as you will see) of my 7 dates?

This article by Bockris in Gadfly magazine confirms the 1977 date, both he and Warhol visited Ali on the 15 & 16 of August, “We arrived at the camp for our appointment at exactly 10 am, Thursday, August 15, 1977″–Bockris. Iteration 2–Wow! signal and iteration 3–16.08.1977 Elvis Presley Died, are covered by this coincidence.

Continuing on with the original research direction I decided to search the Uni library for a book on Timm Rautert. Nothing definitive. No books came up and I could’t see any direct reference to Rautert in the search results but this entry caught my interest. Earthquakes, Photoworks, and Oz: Walter de Maria’s Conceptual Art.

This is an article in Art Journal from 2009 on the “conceptual photographic work of Walter de Maria” which contains a reprinting of an earlier Artforum article on De Maria’s Lightning Field photographs, this artwork was completed in 1977. This directly linked to my project iteration 1–13 July 1977, The New York City blackout of 1977. The lightning that blacked out New York City.

The direct link to Rautert in the article concerned his photographic cycle Ohne Titel (Portrait Walter de Maria), created in 1971 in the New York studio of Walter de Maria. De Maria presented Rautert’s images (as a portrait of himself) for inclusion in the Spring 1972 issue of the conceptual art journal Avalanche. 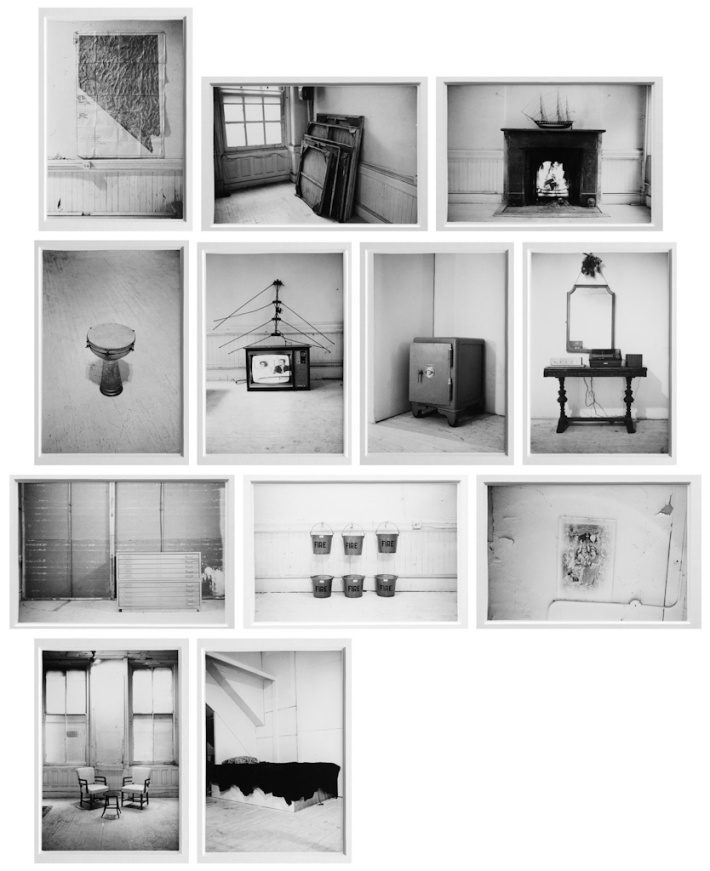 Declared “a photo journal devoted to new sculpture.” “Avalanche was co-founded by Liza Béar and Willoughby Sharp in New York City in 1968. The impetus for the magazine’s creation was to intentionally challenge the more critic-based, formalist-driven, art journals such as Art Forum. The mission of Avalanche was to give artists a voice, a space to discuss their works, their creative processes, and even their political opinions. Béar and Sharp focused their attention on those artists who circulated in avant-garde circles of the 1960s and 1970s, both in New York and internationally.” [link]

To further connect all of these coincidences, I read an interview conducted with Richter in 1977 where he discussed Walter de Maria’s The Vertical Earth Kilometer, he liked it. Richter was asked by Marlies Grüterich on 2 September 1977, what he thought about the current ‘Media’ documenta exhibition held in Kassel, Germany that summer, he responded:

…”there are certainly some chinks of light to be seen there, I mean a few really magnificent works, such as Walter De Maria’s Vertical Kilometre. That’s such an outstanding piece that it almost seems out of place, like a monument in the middle of a funfair.”

Walter De Maria’s, The Vertical Earth Kilometer, 1977, is a one kilometer-long subterranean brass rod, only the top can be seen emerging, flush with the concrete surface it is set into. It is located at the convergence point of four pathways in Friedrichsplatz Park, in-front of the museum Friedericianum.

Installing The Vertical Earth Kilometre, 1977. The Vertical Earth Kilometer was realized through the help of Documenta VI, Director Dr. Manfred Schneckenberger, and the support of Dia Art Foundation. Technical direction and supervision was carried out by the engineering firm of Dr. Hans Jurgen Pickel, Kassel. The work has been on long-term view to the public since 1977.–via Dia Art Foundation.

Walter De Maria was definitely an important artist for Richter and he states so in a 1989 interview with Benjamin Buchloh. An Interview with Gerhard Richter (1986).

BB: “Which artists were most important to you in the late 1960s?”