This is my first proper foray into sound and I’m lucky to have Brendan Walls as my lecturer. I’ve always been interested in sound, and creating sounds in particular. I’ve been longing to have the time to explore the medium for many years, not since my days as a teenager, tinkering in my bedroom have I really had the chance. But i’ve always recorded sound just as I take photos and notes,  and for years I’ve been doing this with my phone, which is ok but not ideal, so getting to grips with a ZOOM H4n has been great. It’s been fascinating discovering sound artists and delving into the history of sound, noise and field recording.

I’m particularly interested in voice and language and William Burroughs may have been an early catalyst for this, but my fascination with communication systems, etymology, and linguistics, etc has always been a leitmotiv in my work.

Using a handsfree headset with a dictaphone. Play and record buttons are depressed with tape door open in order to route the captured audio without recording it to tape. This way I could send the audio directly to the Zoom H4n or through my preamp, or an effects console, etc. 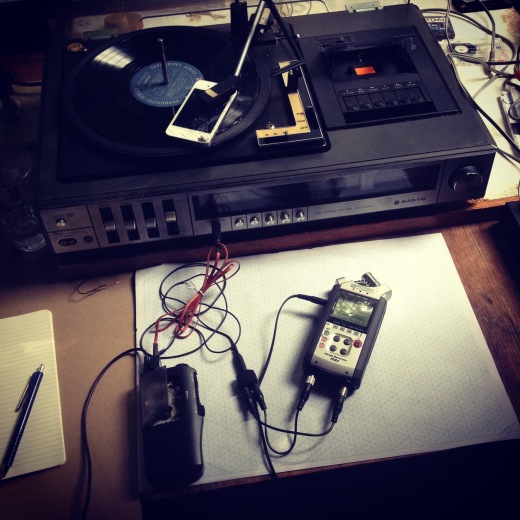 Recording the sounds of a stylus playing a broken iPhone screen routed through a dictaphone. When the phone rang or vibrated it created some interesting sounds.

I love the ZOOM H4n, I became quite attached to it and took it everywhere. For example I noticed there was a headphone jack in the uni elevator so I plugged myself in to see what I could hear, It was beautiful.

I noticed a headphone outlet in the elevator, it made some very interesting sounds moving between floors.

I was now on the lookout for places to plug into. I knew ATMs had audio capabilities people with vision impairment so I hit the town one night and listened to what they had to say for themselves.

I’ll be compiling my sound experiments on SoundCloud @oknovokght

Cables and other Gear

I didn’t really know much about cables and recording sound, for most of the things I wanted to do I just cobbled things together, but once I found out that I could use 1⁄4 inch jacks in the ZOOM H4n I was on fire. 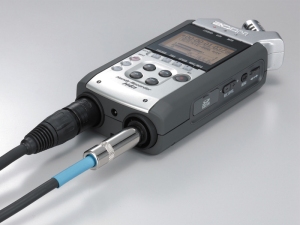 I started collecting all the adaptors, connectors and cables I needed from eBay. But still I didn’t really know what I was doing, I was creating a lot of unnecessary rigs to get my sound.

Tools of the trade. Cables & connectors.

I had a broken ZOOM GFX-707 Guitar effects pedal at home, that i’d found in the trash a while back. It looked like there was some loose connections and just needed a bit of solder. So I soldered it up, found an AC adaptor, hooked it up and it worked a treat.

Special FX. The ZOOM GFX-707 I found in the trash and soldered back to life.

I am very interested in Musique concrète and Acousmatic sound and I have long had an interest in the randomness of the radio dial. I used to make tapes of me scrolling through the stations as a teenager, creating my own unique snapshots of the airwaves. Each session was a unique performance, never to be repeated, completely random and ephemeral.

The ability to record and edit sound has become so accessible with the Apple’s iPhone and GarageBand, and it’s amazing how much material is at our fingertips courtesy of the internet. Field recording is great but i’m fascinated with what we can find in the virtual field, each trip on the internet potentially puts us into contact with not only images and text but an infinite stream new sounds.

I became interested in Live streaming on July 6 2016, when I discovered an American woman named Diamond Reynolds had live streamed the immediate aftermath of the murder of her boyfriend Philando Castile by a Minnesota police Officer. Screenshot of the Facebook video below. 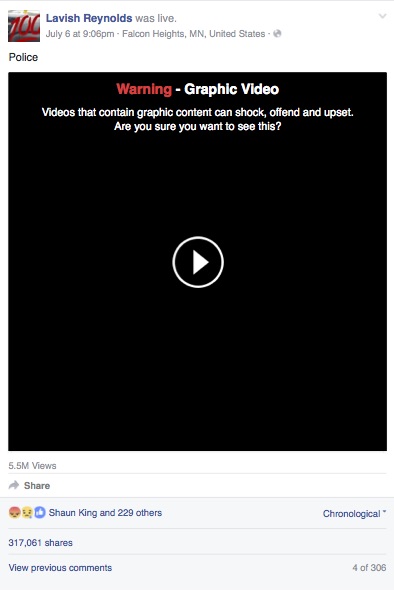 Live Streaming has been around for a while but this incident really put it into the public consciousness, and to me it seemed an inevitable next step in sousveillance and the capturing on video of white police brutality against African Americans, from Rodney King in 1992 to Eric Garner in 2014. Diamond Reynolds’ video came the day after another African American man, Alton Sterling, was  killed by white police officers in Baton Rouge, Louisiana. Two cellphone videos of the killing went viral on social media. These videos prompted mass protests across the country which culminated on july 7 in Texas, when during a protest 5 police officers were killed by a vigilante gunman. Again live streaming technology was used to broadcast events in real time from people embedded within the unfolding situation.

In a bizarre dystopic turn of events the gunman was eventually killed by police using a remote controlled  bomb disposal robot armed with a bomb. This was the first time us law enforcement has used a robot to kill a suspect.

The dominant livestream platform is Periscope (owned by Twitter and launched on March 26, 2015) but Periscope is closely followed by Facebook who quickly enabled its Live-streaming service to be used by the general public on April 6, 2016, after it was initially limited to celebrities when it was launched in August 2015.

The killing of Philando Castile exposed the mass public to the medium but People stream many things;  As I was browsing the Facebook live map on July 10 Cambodian political activist Kem Ley had just been assassinated and countless streams poured out of Phnom Penh; pay-per-view sporting events are re-broadcast from lounge rooms; there’s talk of clowns; the US presidential debate; and almost any other banal chatter, often it’s boring, sometimes not, but it’s always interesting.

The randomness and ephemerality of live streams are very interesting to me, it’s just like tuning that radio dial, you don’t know what is going to come up,

As this research is rooted in a sound project I was interested in only focusing on the audio element of live video in order to see (hear) if there was anything interesting it what was being said by these private individuals willing to to go public–and suffer the inevitable consequences–or maybe find a common trend amongst broadcasters.

However the first thing that stood out was the material quality of the stream, that technical issues–due to hardware, connection, or network lag created interesting audio glitches and interesting audio/visual effects. For example there’s often echo and reverb, feedback, staggering, stammering, freezing, repetition and break-up or drop-outs, the more unreliable the connection, I’ve found, the better. And this also effects the video stream, creating interesting live glitch-movies. This inspired me to try to capture or emulate these presumably undesirable effects. Another interesting thing I had noticed when watching youtube videos, was that a low quality connection seemed to make the audio sound repeat quietly in the background, like a pre-emptive echo.

Through using Facebook live I discovered that sometimes two streams play at once, this inspired me to try opening multiple windows in my browser, each broadcasting a different stream, like using multiple radios, to refer back to the analogy. Opening multiple different Facebook live streams creates a cacophony of voices, each obfuscating the other, but also creates interesting polyphonic dialogues and juxtapositions. But open multiple windows of the same stream and some really interesting audio magic happens. 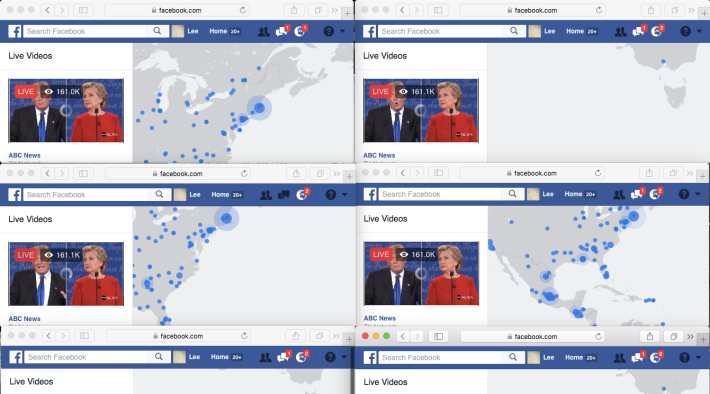 I was already interested in live video feeds, and had come across the work of German Artist Wolfgang Staehle who’s internet-live-feed art project, inadvertently captured the September 11th WTC attacks and live streamed them into the gallery where his project was being shown. 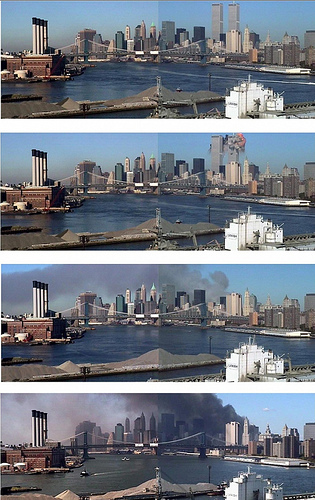 Staehle was an early pioneer of net.art and started ‘The Thing’ a BBS art project, in pre www 1991.

When the King of Thailand, Bhumibol Adulyadej died on October 13 2016, I went straight to Bangkok.

I clicked my way through the blue dots, recording everything I encountered.  I then cut up this audio recording in Garageband, removing the gaps between each stream.

It wasn’t very interesting playing them sequentially like that so I decided to shuffle the slices, arranging them by size and then stacking them so that the sound would be layered. I didn’t want to alter the audio at all just use it as I had found it, this is part of the charm of randomness. I made two versions; firstly using the longest slice for structure, I stacked the slices (72 in total) into tracks, one above the other.

Secondly one of the slices contained an anthem and I wanted this to be a centre piece, so I stacked all 72 slices on top of each other, creating 72 tracks which surprisingly resembled the spire of a stupa, which seemed fitting. I was interested to see how a visual shape might sound.

Line drawing of the Eight Great Stupas, using Kagyu school proportions. Based upon drawings (which use Gelug proportions) by Robert Beer in The Encyclopedia of Tibetan Symbols and Motifs (1999) Shambala Publications, Inc. ISBN 1-57062-416-X

The next step for me and what i’ve been working on is using this plethora of internet sounds in conjunction with artificial intelligence. I’m acutely aware that the internet can be very anglocentric, but i’m interested in non-english speaking sounds,  ideas, and content, even just internet searches that are not dominated by the USA, I’m very interested in how the dominant online voice is affecting global dialectic, and global language/culture/consciousness! I have experimented with dictation and speech to text, and i’m very interested in Google’s Deepmind and TensorFlow, and FaceBook’s ai FAIR. This is a very current area of research and it’s developing and evolving in parallel with live streaming, it’s very exiting and a little bit scary too.

2 films I re-watched recently viewed within the current context/techno-socio-political climate. 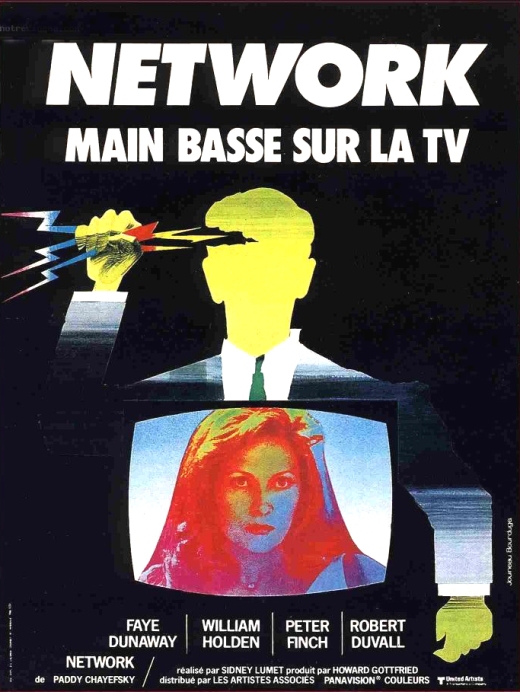 I’m always listening to Eno, but I’d never heard this one, I Dormienti (The Sleepers)

I love this work and how it came about. It is so romantic and melancholic.

and his use of found/ archival sound here.

By a fortuitous chance I watched François Girard’s Thirty Two Short Films About Glenn Gould,  I was interested in his telephone idea, and his documentaries, for example The idea of north, when audio is played at the same level as others creating polyphonic obfuscation©.

This particular scene was very interesting to me.

also see: The Solitude Trilogy… particularly The Latecomers. Sounds of the surf layered with interviews.

The style of simultaneously combining a number of parts, each forming an individual melody and harmonizing with each other. his love affair with 16th-century English polyphony.

obfuscate:
Make obscure, unclear, or unintelligible: the spelling changes will deform some familiar words and obfuscate their etymological origins.
• bewilder (someone): the new rule is more likely to obfuscate people than enlighten them.

This is problematic ((((ECHO)))) I just found this Echo recording wire.  I was playing around with creating a symbol to represent the echo as it’s something i’ve been thinking about a lot from this work, I guess its an obvious symbol. However I wasn’t aware it had a sinister sibling, the triple parentheses, an antisemitic symbol that surfaced online recently.  Better be careful.

This was my starting point: Live streams

can computers be creative?

Graphical sound or drawn sound (Fr. son dessiné, Ger. graphische Tonerzeugung,; It. suono disegnato) is a sound recording created from images drawn directly onto film or paper that were then played back using a sound system. There are several different techniques depending on the technology employed, but all are a consequence of the sound-on-film technology and based on the creation of artificial optical polyphonic sound tracks on transparent film.

Stupid Geek Tricks: How To Turn Images And Photos Into Sound Files