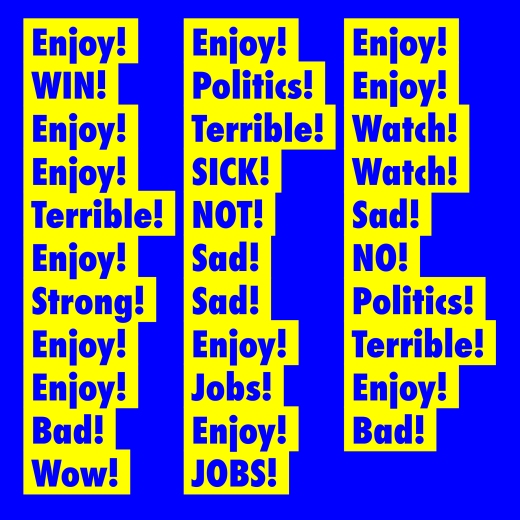 January 20th 2017, will be remembered as the day  I began collecting tweets from @realDonaldTrump, with the intention of creating an algorithm that would generate content for a body of work.

I didn’t set out with a complete algorithm but allowed one to evolve in real time. The primary rule was that the tweet must end in an exclamation !

I have a deadline for these projects so I couldn’t let the thing get out of hand, plus once the algorithm had been decided upon, I became less connected to the content of the tweets, which actually succeeded in making the project a little less interesting. Therefore I had to install a boundary; I decided that the commonly noted benchmark of Trump’s first 100 days in office would be a suitable cut-off-point for collecting data.

This is the final algorithm:

TRUMP TWEETS! ALGORITHM {A – I}

I principally used excel to collate my data, one word per column.
^ 9 word limit was dictated by the excel spreadsheet: 9 columns (A–I)  [Artificial Intelligence ?]
* No dashes were allowed as excel could not discriminate between this symbol and a word.  But Hyphens are allowed as they don’t break words e.g. “un-American!” Also & (ampersands) were allowed because they represent the word ‘AND’. Other Arbitrary decisions were made to keep it simple and for aesthetic reasons e.g. no #hashtags, no @handles, and no links.

Within the 100 day period, from a total of 500 tweets, the algorithm extracted 131 tweets of 9 words or less. Now I have to decide what to do with them.

Now this is a lot of information to work with so I will try out a few other things, to see if anything emerges.

Before moving on though, one interesting thing to note is that from this list of 131 original results there are some sentences that I like and would like to use e.g.

I will study this dumb deal!

Step 2: From the 131 tweets a new dataset of 32 single word sentences was extracted

Here are the final 32 words in chronological order:

Notice the repetition? (yes). Now I and AI are all about finding patterns in data so instantly we can see that these 32 words can be reduced further to produce a list of just 13 exclamations.

They are, in alphabetical order:

Enjoy! Emerges as the most common exclamation. Trump clearly loves entertaining his ‘fans’ on TV.

Wow! Truly exciting findings. But now I have some subject matter to work with.

One thing I worked with early on was TTS (text to speech) so I thought it was appropriate that Apple’s Bad News system voice would read out the tweets.

For this I simply had Bad News read the text file, recorded it in GarageBand, duplicated the track, put an effect on that and played them simultaneously. Now it’s not great, but it is kind of interesting and I like the cadence and decay. What i’m enjoying here is that i’m employing tools I have at at hand and are ubiquitous. By using just my laptop and the internet I’ve created something from the results of the algorithm that will now evolve into something else.

One thing that stands out for me while doing all of this is how boring the initial results seem. I mean how exciting is the final list? The word Enjoy? Or even having a computer read words in a funny voice?

But can it become interesting? Or is boredom/failure a valid result?

As always the process is what interests me.

Trump’s tweets are purely a continuous stream of unpredictable, random data. Earlier I was thinking about using livestreamed video from Facebook and Periscope as my data set, but this ‘material’ is just too big and not easy to work with. This is the stuff Google and Facebook’s AI should be, and probably are working with. So I chose Trump’s Tweets. Primarily because they are ridiculous but also powerful. His use of Twitter interested me during the debates last year, but then I became interested in the amount of bots shaping the conversation between him, Clinton and the public, and the rise of ‘Fake News’. I also chose them because they were simple things to work with, easy to capture.

I am interested in the laborious, manual act of collecting and processing all of this data and in making structural decisions based upon the data, as it comes, is examined and is manipulated (with a set of tools whose usage also has to be learned).

So if a computer program could do this much more efficiently, why bother?

Well I am interested in human error for one, and in whim or the arbitrary decisions that shape and evolve a system as it unfolds, and yes in boredom. But also I do not know how to program. Call it a work around, but I think it is this hands on experience that gives me greater insight into the possibilities that computers and by extention, AI can provide artists and humans in general.

In a way then I am training myself, I am learning as an artificial neural network might learn. I think I am trying to understand–as we encounter the world–what provokes us to respond, to create. This is what interests me, and clearly any data is potential subject matter, just as say, a landscape painter examines the visual data they are presented with, then extracts and presents what they want from it.  It would seem that it is the apparently individual choices that each artist, indeed each person makes when responding to any data that makes for the richness of creation.

Maybe creativity is just a way to control or order randomness and chaos, and therefore is no more than a function of the human brain’s data processing.

Methodology outside of the development of the algorithm

My methodology was quite simple and employed tools that are ubiquitous. Using a computer I periodically checked the @realDonaldTrump twitter feed and copied/pasted the tweets that adhered to the algorithm into a text document, which was then transferred to an excel spreadsheet.

As I begin to see patterns a system evolves. To the exclusion of more complex patterns, see I often prefer a heuristic, Occam’s razor-style approach when working with this kind of data, within a timeframe or project boundary. Which kind of contradicts what I said about not wanting to use a computer program to do it. But no, it doesn’t, I also like to be present, I like the process, i’m not sure i’m into the Black Box side of AI.

Anyway, eventually an algorithm is produced that can be ‘run’ on the final dataset which can then start to be formed into something.

What makes this interesting is a subjective matter. If I decide to follow a reductionist algorithm then I end up with something like the word Enjoy! Which may or may not be interesting as an end result, or even as foundation for further exploration. Only in my willingness to continue, will time tell…

I made a simple newspaper/booklet: (see pdf in link below)

I used Futura Condensed Extra Bold, So it’s a bit Nike, its a bit They Live.

And I made a little film (this was before I had the complete list so i’ll redo this):

This was a bit more technical and utilised more advanced software tools. But I used Cooper Black and spliced this with some digitized VHS footage that I’ve been working with elsewhere.

I am quite interested in the sense of aporia I am getting from this research, post Trump, post Brexit. What with Trump’s appropriation of “Fake News” from the mainstream media reporters who were trying to salvage what they could from their social media nemeses.

Also the mirror image, or the flip is a recurrent concept in my mind. It conjures images of Alice in Wonderland, a place where nothing is quite as it seems. Up is down, down is up. Left is Right, Right is Left. So simply put these words extracted from their content could be quite innocent, but they are also quite sinister and insidious. There is a definite hint of the Orwellian Theory and Practice of Oligarchical Collectivism here. So I am using the friendly Cooper Black and a nice #0000ff  like a lovely blue cloudless sky. Except, it’s not cloudless and it’s not #0000ff.

Here’s another sound piece read by Bad News. This time I didn’t put any spaces between the words, and for some reason Bad News read the exclamation point as BANG! Cool!

Some resources and links

Here is a valuable resource http://www.trumptwitterarchive.com

previously each entry displayed the tweets in their entirety but it seems the creator has opted to cut them short and provide links to the actual tweet.